How to Play Texas Hold'em | step by step guide

Learn how to play no-limit Texas hold’em with our beginner-friendly step by step guide that explains the rules in the same executive order as you would play a poker hand. But first you need to know when to bet or not. 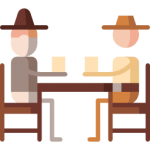 There are four betting-rounds in a Poker game, and at each of them you can whether check, fold or raise.

The strength of your poker-hand should determine whether you want to check, fold or raise on each betting-round.

Check to see a free card in the next round

Get out of the hand

Put more chips in the pot

No limit Texas hold’em starts with the first betting-round called pre-flop. All players are getting two cards that lay face down not visible for the opponents called hole cards.

Overall there are four betting rounds, and at each of them you can whether check, bet, fold or raise.

When the first betting round is closed the dealer reveals three communal cards (called flop) that are visible to everyone and the second betting-round starts. Each player now has to evaluate what Poker-hand he has made or is drawing to and assess what action (bet, fold, check/raise) he has to take. 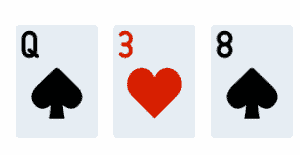 Now it is time for the third betting round, the turn.  Each player has to reassess their hand strength as the turn has potentially brought change and base their decision on their evaluation.

The Turn – Another communal card

The fourth betting-round starts and brings the river. Now it is time to assess the value of your hand and base your decision upon the strength of your hand. When the last betting-round is through, players have to reveal their hands to compare their hand-strength and consequently the winner of the pot (if you or your opponent fold, there will be no showdown).

The River – Another communal card

After the last betting-round, in case you or your opponent didn’t fold to the last bet, your poker-hand is going to be revealed and compared to your competitors hand (called showdown), and the strongest hand wins the pot – which has accumulated by bets made by any player in all betting-rounds.

In case your poker hand has the same strenght as your opponents, the pot is split equally.

Poker Hands | How you make a hand

A poker hand is made up of five cards. You use your two hole cards in combination with three, of overall five, community cards- flop(3), turn(1), and the river(1)- to form a hand. The two least strong hands are discounted in the  poker-hand-ranking.

No Limit Texas Hold’em requires two players to function and is commonly played between two to nine players. Poker has rules and is a game of several players, each player has a position on the table, and the action moves in a clockwise fashion. You play No limit Texas hold’em with a deck of 52 cards, ranging from two to ace. Each card has four different suits (colours); Spades, Clubs, Hearts & Diamonds.

Four betting rounds come in the following order: Preflop – flop – turn – river. In every betting round each player has to make his move while the big blind always closes the betting round as he is last to act.

The game starts with the first betting round – pre-flop – where everyone receives two cards, called holecards, which you hide from competing players. At each betting round you can either fold, check, bet or raise. Your Poker-hand-strength should determine which action to take.

The goal when playing Texas Holdem is to win chips by either forming a winning hand with your two hole cards in combination with the communal cards (flop, turn river), or to win the hand by making your opponent fold a better holding.

The fundament of every poker strategy relies on playing the right hands pre-flop. In our suggested pre-flop starting hand charts we will show you the best starting hands in NL Texas Hold'em.

Not sure what beats what? After reading this article you wont have to argue or wonder anymore not knowing why you have lost! Check this page to find the official Texas Hold'em hand-rankings.

In poker, every player makes his move after each other, progressing in a clock-wise fashion. You are either out of postition and first to act, or, in position and last to act. Learn the positions with us!