Online Poker in the USA | Legallity, fun and trustworthiness check

Want to know which are the best  poker sites for players from the USA that want to play for real money?

Good, because we tested and reviewed plenty of US poker sites to compile a list of only the best online poker has to offer for residents of the United States of America.

You might be wondering if playing real money poker from the US is legal, and we understand your concern. That is why we covered if poker is legal in the USA on this page to clear things up for you.

There are plenty of US facing poker sites but only a few are top notch, fully legal and offer a fun experience. 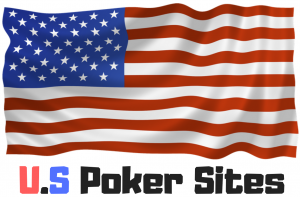 Best US Poker sites you can play poker at in 2023

Currently, there are about 10 US real money poker sites available, but unfortunately, a few of them are to be avoided as they are either unregulated, don’t offer anything attractive or are way to small for you to have a fun time playing online poker.

On this page you can only find the top us poker sites that are legal, reliable and fun to play at!

We reviewed each poker site, and the ones that don’t pass our strict quality control have not made it to this page.

Check out our recommended legal US Poker Sites below and read our reviews for more information about each respective poker site.

Playing poker for real money from the U.S | Is it risky?

Playing poker for play money where there is nothing at stake is not very entertaining as no one cares whether they are losing or not. This fact kills the complexity of poker, and the fun, completely. So, if you seek to enjoy a real poker game with all its fun elements, you would want to play it for real money. And you can do exactly that at all the poker sites above with plenty of cash game and tournament action!

“But is it safe to store money at a poker site?“, you might ask. To be honest, it is not 100% safe. The thing is that most poker sites that operate in the U.S are registered off-shore, and if they are, you are not really protected by in-country laws which means that the government can’t protect you in case the poker site is closing, or is involved in any type of shenigans that forces them to close.

Don’t get me wrong, it’s not like you have lost your money just making a deposit, but we advice caution because you can never know!

But you are not bound to make a deposit and invest your hard earned money to play poker for real money, you could alternatively play freerolls without risking a penny that allow you to play tournaments for free with a chance to win real money.

If you want to play poker with your own money, you can just use the most common payment methods to do a transaction that is usually instant.

is online poker legal in the USA?

Thanks to the unlawful internet gambling enforcement act in 2006 (UIGEA), many people believe that playing poker for real money from the USA is illegal, that is not true however. There are plenty of legal US poker sites out, and available for you to play real money poker.

This law was designed to forbid payment processors, particularly banks, to service any online gambling sites that provide games of chance, rather than forbid online poker in itself, and private citizens are in no way affected by this law.

Many people falsely believe online poker is illegal in the U.S.

It is completely legal to play online poker in the U.S. The reason why most think that playing online poker for real money is illegal is that the poker sites have such strict laws to obey by in the U.S, that they rather register their company off-shore where the law is more loose.

There are two ways for online poker sites to offer real money poker to U.S residents, either a poker site operates from an off-shore location to provide online poker within MOST STATES of the U.S., or they must be licensed for each state where poker is legal to serve its residents.

The current problem with poker sites in the legal states is that you can only play against players from the respective state in which the site is regulated in, and that restricts you simply from finding enough games running.

All those poker sites in the legal states have in common that they are publicly traded, and exactly that forces them to appeal for legislation in each state rather than becoming a legal U.S poker site by registering off-shore, in Costa Rica for example.

If you are living in a regulated state, i would suggest you to look at those sites, as the offshore websites are not offering their services to you. If you are living in a state where online poker has not been regulated yet, your only choice when you want to play poker for real money from the USA is to play at a so-called off-shore poker site (all shown poker sites above), which simply means that the site is regulated outside the USA, but has no valid license (which serves mostly to protect consumers by law).

This whole process of avoiding national laws, by having it regulated off-shore, is by no means illegal for you as a player, but more a way to pass by inconvenient U.S. laws that haven’t been updated in decades and restricting poker sites from operating freely within the USA.

The bad thing about offshore U.S. poker sites is that they do not hold a license, at most they are just regulated, and whenever that’s the case, the user is not protected by the law, meaning if the ship goes down you go with it.